Facts You Need To Know About Cartagena.

Cartagena is located above sea level with a humid tropical climate between 28 ° C & 32 ° C. The city no It has seasons. However, it has a dry season (June-August), a rainy season (April-May and October-November), and a cool-season (December-February).

Located in the north of Colombia, Cartagena de Indias is considered the country’s most important tourist destination. Due to its strategic location in the Caribbean, the city was the main port of America for the Spanish empire during colonial times and a refuge for treasures and riches. For this reason, the city had to be protected against pirate attacks with fortifications and walls, which can still be appreciated today, and which earned him his Recognition as Historical and Cultural Heritage of Humanity by UNESCO in 1984.

Although through the streets of the Historical Center and Getsemaní, you can see the vestiges of colonial architecture and Republican. The city has given way to modernity with modern structures, generating a unique contrast, which has allowed the mixing of different cultures.

For visitors, the city offers a diversity of plans with its 11 kilometers of beaches and an archipelago of nearby islands, ideal for enjoying the breeze, the sun, and doing all kinds of nautical sports; lots of streets, alleys, and walls waiting to be explored, squares and parks where you can feel and experience the mixture of cultures between Cartagena and visitors, natural settings, among other spaces that will make you understand why the city is considered the cradle of magical realism and where your people will wait for you with open arms. 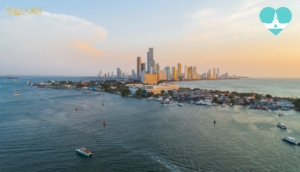 Share This
We want to hear you
Hello, we would love to help you, tell us what you have in mind. let's make it real🌅⭐🎬
Go to mobile version